That’s why I have undertaken to make an exhaustive list.  This should include everything we need to do whenever it’s time to go home.  This list is meant to be complete, so if I’m missing anything at all, please write a comment below.  I’ll be more than happy to add your ideas to the list!

This is a living article.  I regularly add more to this list when I think of new things I need to remember whenever I leave the cabin.  If you notice something missing from this list that you think really should be here, please share it in the comments.  My goal is to eventually make this list exhaustive of everything you should do when you leave your cabin.

You definitely don’t want to leave a bunch of perishable food lying around your cabin.  Unless you plan to be back next weekend, it’s good practice to empty out the refrigerator and any food from the cupboards.  It’s alright to leave behind canned food.  But even dry foods that don’t spoil can attract small animals and insects.

It’s also good practice to empty the refrigerator and turn it off when you leave.  This will cut down on power consumption which is important particularly in an off-grid situation.  If you have solar panels and a home battery, you definitely don’t want to arrive at the cabin on another weekend and find that the battery if half-drained because you left the refrigerator running.

Plus, depending on the food you take to the cabin, it may be totally spoiled by next weekend.  So save yourself the likely cleanup and potential insect or rodent infestation later by emptying the refrigerator and cupboards of food whenever you leave.

For your cabin-leaving checklist, it’s probably a good idea to make a list of all of the places you store food.  Then you can check off each line as you clear out that spot.

There are some items that you will want to store at the cabin all the time.

You can see how I would run into an issue if I don’t take inventory of what I have left before I leave.  3 weeks from now I may not remember that I was low on forks last time I was at the cabin.  So when I get up there I might find myself eating everything with spoons.

The same can be said for other items that get used up at the cabin.  Batteries, firewood, paper towels, toilet paper, etc.

I encourage you to make a list some time of all the consumable stuff that you use at your cabin.  Make that list and then as you’re going through your leaving checklist, just look at each of those items and place a check mark next to everything that’s good.  Then you’ll know that next time, you need to bring up more of everything that’s missing that check mark.

Turn off everything the uses electricity

Like I said before when talking about the refrigerator, this is particularly important if you’re on a solar and home battery setup.  Let that battery get full while you’re gone and make it last longer by not draining it constantly.

If you’re tied into the grid, it’s probably not a big deal to leave an oven plugged in.  But it’s a good idea to make sure it’s not left on.  If you’re totally off-grid and use a generator for all electricity, then when you shut off the generator it will turn everything off by default.  But I really like to turn things off before disconnecting the generator.  That way things don’t turn on without me knowing next time I plug in the generator.

All these electrical items are probably worth listing out specifically on your personal checklist.  Otherwise it’ll be easy to miss something.  Think about lights and lamps, chargers, appliances, anything that you have at your cabin that should be turned off before leaving.

Of course, if you want you can leave on outdoor solar motion lights if you want.  I like to leave mine on so if I arrive next time and it’s dark, I have some lights on for me.  The ones I use (Amazon Link) only turn on when it’s dark and when there’s motion nearby.

You can point the motion sensor and set the sensitivity such that it doesn’t turn on every time a breeze blows some nearby branches.  But it’s nice when I get to my cabin and the lights turn on when I pull up.  These lights also give an added measure of security to the cabin whether I’m there or not.

It’s not a good idea to leave stuff all over outside when you leave.  If it could be carried off easily by someone passing through, it should probably be locked up.

It’s not that someone is necessarily likely to come by while you’re away and take all your stuff.  But people hiking, dirt biking, snow shoeing, etc. through the area could come across your place.  Even in some really remote locations, it’s surprising what kind of stuff disappears.  So if you could carry it away, don’t leave it out.  This includes things like generators.

So make a list of the stuff that you do leave outdoors when you’re around (maybe an , generator, hoses, etc.) and check them off as you bring them in.  Or just have a single line item on your checklist to “pick up everything outside” and then just put away all the stuff that’s outside.

Do you ever have problems with mice, insects, or other pests?  Then make sure that every time you get ready to leave the cabin you set out your traps, poison, or other repellents to keep them away while you’re gone.  Otherwise you might end up with a whole swarm of ladybugs taking over your cabin, or worse.  To learn all about how to keep pests out of your cabin, check out my article on the topic.

This seems like it should go without saying…  Yet I’m sure that I’m not the only person who has rushed out the door and forgotten to lock it.  Especially if you’ve got kids to load in the car, or you’re in a rush to get on the road before dark.  That’s why I like to put this at the bottom of my checklist.  The list isn’t completed until the cabin is locked up!

Also, this includes any outdoor storage sheds.  I like to keep the generator, hoses, and any outdoor items in a shed rather than in a closet or something inside.  Lock it up. 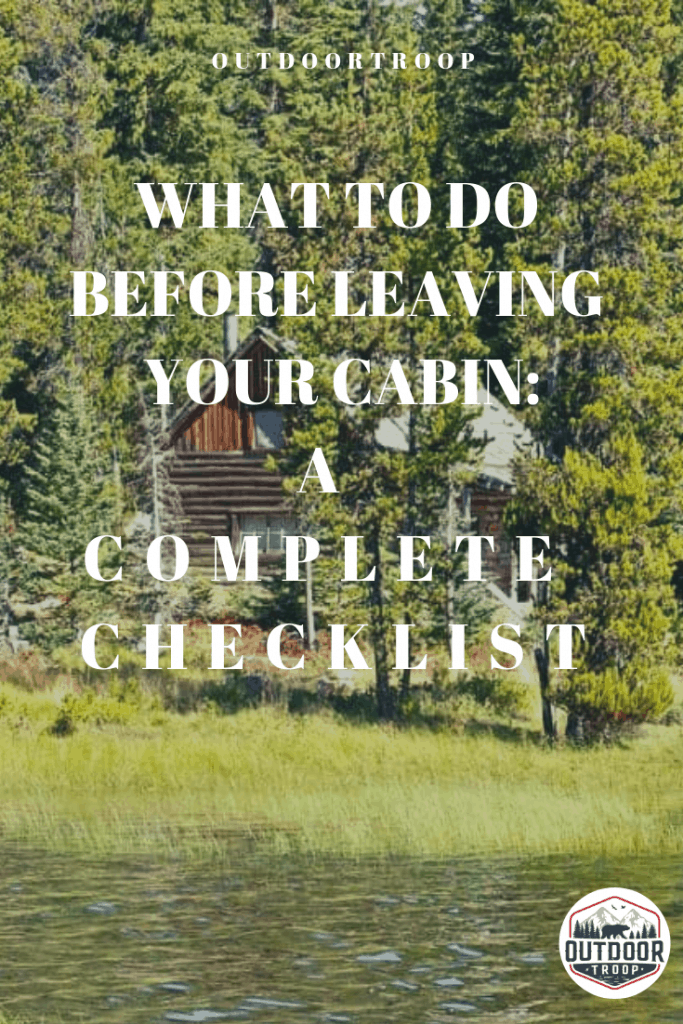 link to Can You Bungee Jump from a Hot Air Balloon? Where to Go

You’ve heard of bungee jumping from a bridge, but what about jumping from a hot air balloon? You have to admit, the prospect sounds appealing to you. Is it possible? And if so, where can you...

Continue Reading
link to Is Bungee Jumping Scarier Than Skydiving?

Although they’re disparate enough, bungee jumping and skydiving receive a lot of comparisons to one another. Some people who have tried both have even said that bungee jumping is the scarier of the...